This is the part of the coop/fort that I put off the longest.  In most projects there is, to some degree, a step that I just put off – sometimes for a week, sometimes for a year.  Once I start doing it, all is well, but usually I just don't know how to go about starting the task or am somehow intimidated by the step or the level of commitment it will demand.  In my defense, this project was interrupted by legitimate life stuff getting in the way but even when I had the time and frame of mind to work on it, for whatever reason, actually digging the holes to bury the 16' 4x4s for the fort/coop was daunting.  Part of the problem was trying to figure out how to get the sixteen foot 4x4s home when our best hauling vehicle is a minivan.  This is where my friend Joyce enters the picture.  She had already built her boys a fort which is high up in the air supported by huge 6x6s.  Joyce told me about Parr Lumber who for orders of $100 or more will deliver at no extra charge!


I ordered my posts along with some other lumber to get my order up to the minimum required for delivery and in anticipation of a new fence one day.  Not only did they deliver but the gentleman pushed the lumber right into our garage, which is atop a steep driveway.  The lumber guy had some mad forklift skills. 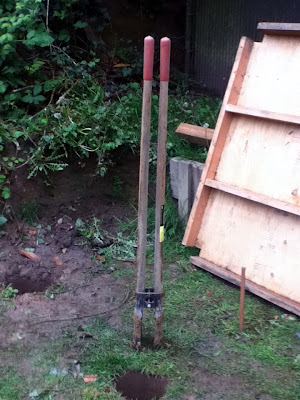 My husband dug the first post hole and really got the project moving again.  I marked where we would dig by placing the base of the coop on the ground and marking where each 4x4 would run up the sides.  We used a post-hole shovel and dug down 4’2” which is about as far as I can imagine digging with a post-hole shovel.  I knew from a previous call to the city that I would not run into any underground pipes, mains or lines.  Since the spot we were putting the coop/fort wasn't perfectly level I did end up digging the back holes a little deeper so all the posts would be about the same level up top – all four posts were not perfectly level with each other in the end and that was fine. 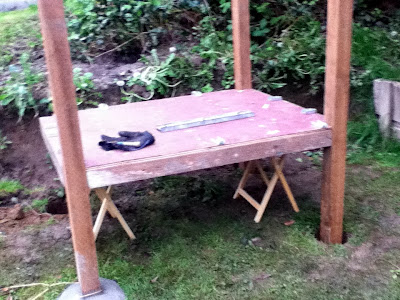 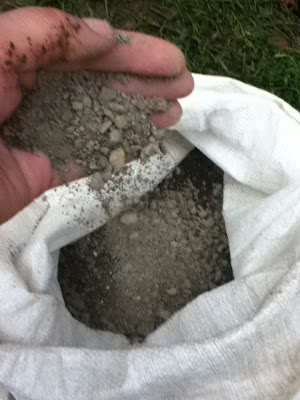 Four feet down is a deep hole and I have been accused of overkill but knowing that would be the foundation for everything else I didn’t see how it could be too deep.  TIP: I have been told that for a post which will carry a lot of weight it is best to go deeper rather than wider.  Each hole was about 8” across.  TIP: At the bottom of the hole I used about 2” of crushed rock to set a firm base, for a little drainage and to serve as a barrier between the dirt and post. 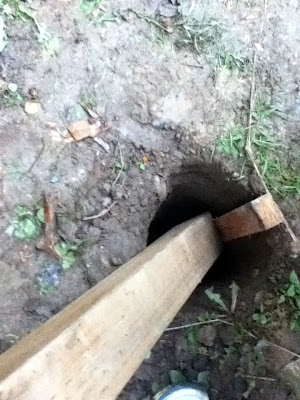 TIP: To set the post in the holes I followed my friend Joyce’s advice and to keep the post from tearing up the side of the hole thereby adding dirt to the bottom I placed a board on the side as it was lowered.  I was able to drop the posts in the hole on my own using a hill to balance the post on.  Had it been flat ground with nothing to use for leverage, dropping the posts in would have been a two man job.

Mixing the cement was not nearly as difficult or messy as I thought it would be.  Jason helped me with this.  We dumped a bag of dry cement in a wheelbarrow and added water one bucket at a time.  I simply hosed off the wheelbarrow when we were finished. 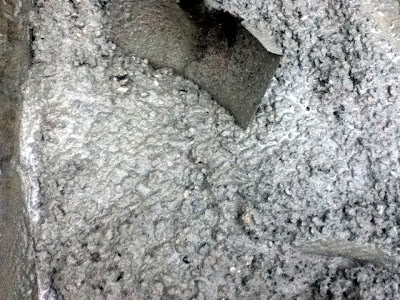 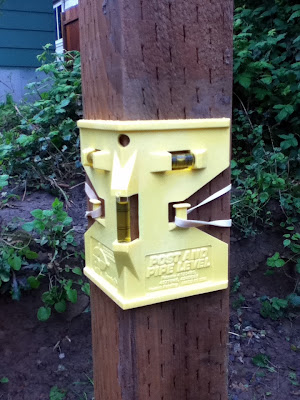 TIP: Joyce cautioned me not to move the post very much once the cement was poured.  She lost a few inches of depth by accidentally moving her post up a little as she was shifting it.

To make sure my posts were square with each other I ran some twine between the posts and before using cement I made sure a board could lay flush between the 4x4s and I even placed the coop base in between them to be sure.  It was a hassle to be so cautious but absolutely worth it. 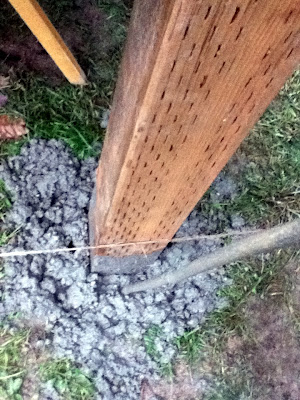 I had to expand my last post hole by a couple of inches because it was not in line with the others and the post would have been in direct contact with the dirt. TIP: It’s important to have the posts surrounded by cement and not touching the dirt so it will not rot.  It is well worth the trouble of checking, double checking and even redoing so that your posts are lined up with each other perfectly and centered in the cement. 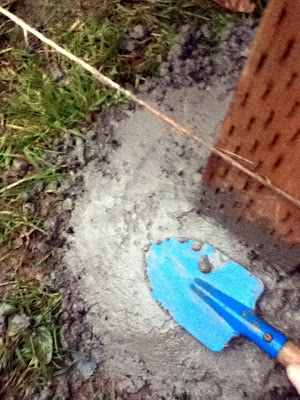 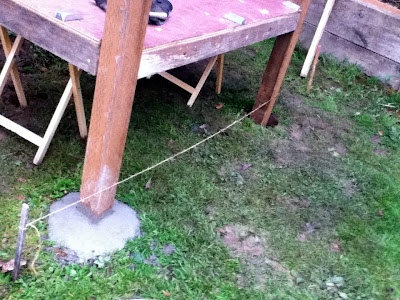 To finish the cement job, I mounded the cement up around the post and smoothed it with a shovel to allow for water to drain off of it.  Since I live in Oregon and it can rain at any time I stapled some bags to the post covering the cement to allow it to dry.  It did sprinkle during all this post burring business but with a little protection from direct rain the cement dried just fine. 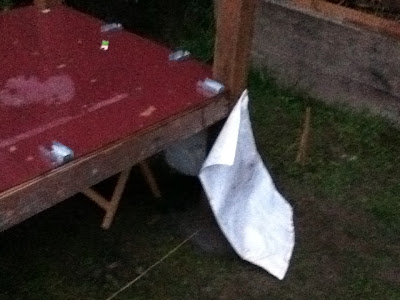 Once the posts were cemented in the hard part, which really wasn't that hard, was over.  The project flew after this with of course the exception of the finishing touches which always take forever.  I really enjoyed the rest of the project and though it took me some time to get the posts in the ground it came together really well.  It was so much fun to figure out how to go about each new step as the project evolved.