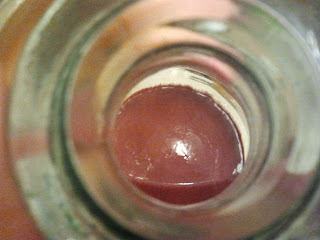 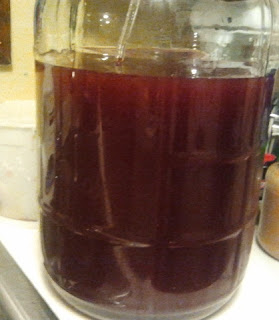 My pomegranate wine has been patiently sitting in the corner where I last left it.  I meant to rack it for the first time at 3 weeks but I was late as per my usual schedule.  It has been four and a half weeks since the wine first went into the carboy and I did rack it just now.  It has been quieter lately, probably since week three when I was supposed to first rack it.  The bubbles have been rare and come to think of it may have ceased all together.

I had expected the purple liquid to clear up more than it had - it still seemed just as cloudy as when it went into the carboy although when I compare it to the pictures I previously took, it has cleared up.  It wasn't until siphoning the wine that I saw how much sediment really had settled at the bottom of the jug!
I was

Of course I taste tested my pomegranate wine.  It is clearly in its infantile state but as always, it was quite a pleasure to taste that this wine tastes like wine!  It is

already potent and explodes in the mouth.  The pomegranate is of course the predominant flavor but the lemon and orange flavors are obvious too.  It is bitter and tart with a filmy aftertaste.  This all sounds a little crude but I am pleased so far.  I added a half a cup of sugar after I racked the wine hoping it would re-energize the fermenting process as well as hopefully help the wine mellow it out.  I like my wine dry but this was in no danger of being too sweet.  As soon as I added the sugar it bubbled like crazy so I think its good I gave it some more sugar to feed on.  I'll probably add more when I rack it again in a couple months.