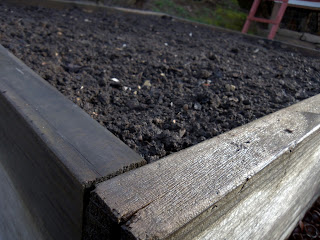 We have been having some real fresh sunny days here in the Northwest and I am aching to dig in the earth and plant some seeds.  Last year I started out by building some raised beds.  I used the same spot I had used the year prior only instead of digging up grass and amending the earth any further I covered the space with cardboard and added some raised beds! 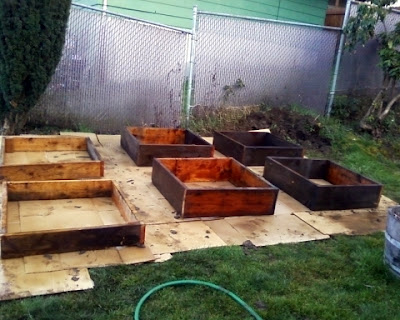 Yard Prep  I had to level the ground a little but didn't take too much care with that.  Cardboard helped to expedite the death of the grass and weeds and I didn't have to worry about removing it since it decomposes so quickly.

Wood  Instead of using expensive cedar for my garden beds I salvages some sturdy lumber that was already cut in dimensions suitable for my task.  I nailed the boards together using 16d nails.  I didn't for this but have since learned that pre-drilling where I was going to sink these nails could have saved me much time and frustration   The dimensions for the back four beds are about 3.5'x3.5' made out of 2x10's and the front two are the same only 6" high. All the boards cost me $20 total.  Something new that would be suitable for this task would have cost me well over $100.  These beds have at least 5 years to give me and probably more. 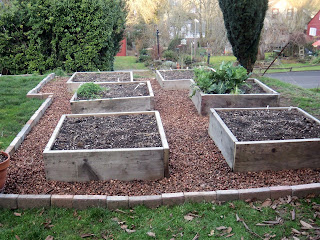 Dirt  I ordered dirt from a close by landscaping yard.  They helped me figure out how much I needed.  The delivery charge was something like $20 and it was well worth the money to have the dirt dropped off at my driveway. 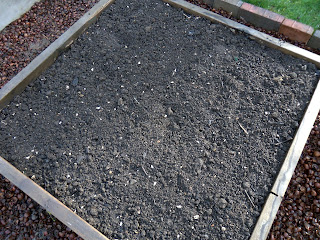 Stone  I wanted a visual separation for my garden as well as a divide between the grass and the beds so I partitioned it off with half buried stone which I purchased for half price at a landscaping yard - it was a discontinued brick. 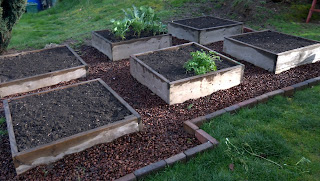 Ground Cover  Instead of live ground cover, rock or bark I used hazelnut shells in between the raised beds.  They are supposed to help keep the slugs away but I really just chose them because I think they are pretty.  They have been a fantastic weed control. 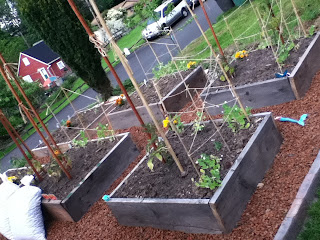 Trellis  After the initial beds were build and planted I added some trellis' for my peas and later green beans to climb.  Attaching posts and twine to raised beds for climbing plants is extremely easy.  I screwed in some 1x2's to each side, crossed them at the top with another 1x2 and ran string from the top board down to screws half drilled in on the raised bed frame. 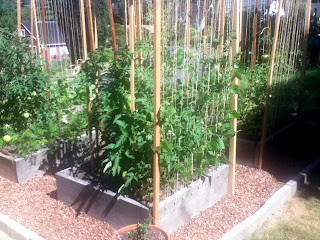 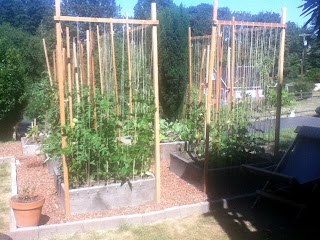 Expenses  I wish I had kept an accurate account of my expenses for the raised beds.  I'm not really into spending a lot of money on something that should be close to free - like growing a plant, but this was fun and I really enjoy how it looks plus now that they are built, gardening will be even easier for me in the future. My estimated costs:

This is a modest garden but certainly more growing space than if I didn't have one at all and I pack a lot of plants into this rich yummy soil.  I also plant throughout the rest of my yard and that helps boost my little space's growing power!

Whatever your goals for this spring and summer are, I hope you have a blast achieving them!  Growing veggies is one of my favorite things to do.