Here it is, still not 100% complete but if I wait for that moment I may never post pictures.  Here is my chicken coop kid's fort combo. 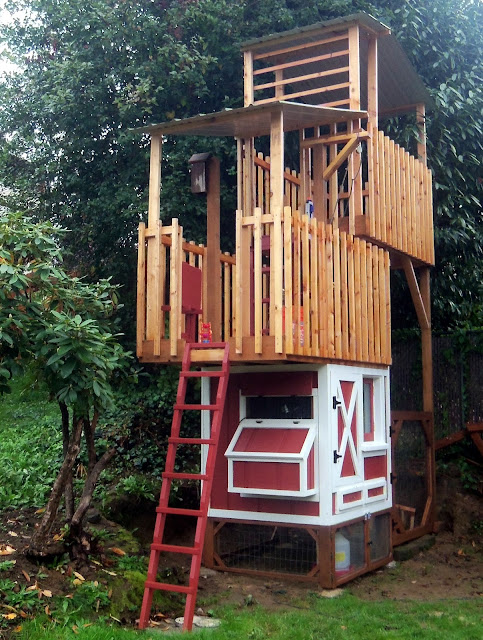 Though I did most of the work this summer, the idea came several years ago after we moved to our current home.  When we moved into this house which came with a miniature yard, the old chicken coop was the first thing to go.  I knew if I wanted chickens I would have to sneak them into the yard.  At first I was just going to build a long and narrow coop and put it right up against the fence but then I thought, why not combine the chicken space with kid space by building a fort on top of the coop!  So that is what I did, problem solved. 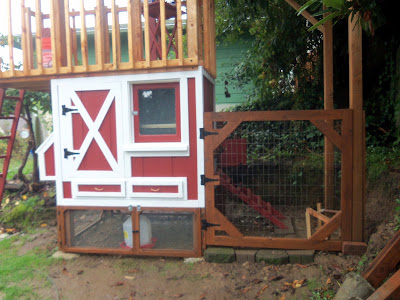 I knew I would have to actually build it when I heard my son tell one of his classmates that I was going to build him a fort.  Three years later, I am (mostly) finished.  I hope to spend some time on here going through the process of planning and building this baby for anyone who has some ideas of their own on random fort and coop type structures.  Taking it one step at a time it really was not that difficult.  Like most things, the initial intimidation factor is a million times more of a barrier than the building part. I did the entire thing myself except for the use of my husband's muscles on some of the real heavy stuff.  Can you tell I hate even admitting that? ; -) 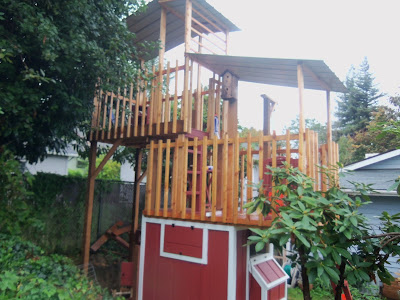 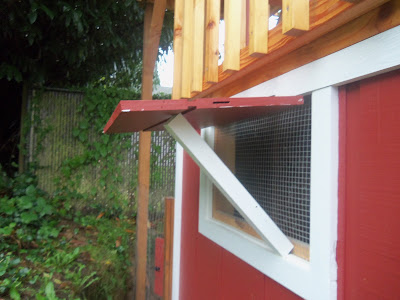 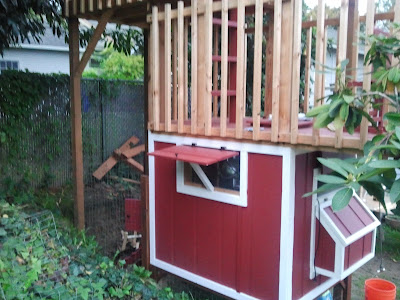 I would like to give a shout out for those who made this possible so here goes:

I thank my husband, Jason for only freaking out minimally and infrequently, "You want to build it how high?" "You're going back to Home Depot again today?"  Thank you Jason for holding down the real fort from dawn until dusk all weekend every weekend for a while so I could get some stuff done.  Thanks for your muscles and for digging the first hole for the first post which led to the rest.  Oh, and thanks for telling people when they complement you on your fort that your wife built it.  I love you!

I thank my kids for actually thinking I was going to build this just because I said I was.  Also for eating peanut butter spoons and banana's for dinner on multiple occasions because I was working outside till dark or later.  Thank you for being the inspiration for this all! I love you to pieces!

I thank my friend Joyce who had already built her kids a fort!  She told me where I could get the 16 foot posts delivered to my home (thank you Lowes) and was a big help in giving me the courage to get those posts in the ground.  Thanks for letting me come see your fort and for being soooo awesome in general!

I thank my dad for telling me how to do it and all his invaluable help at many steps in the process.  I was going to layer a coop on top of a base and then put a fort on top of the coop.  He told me to build the entire structure along the 4x4's which would be buried in the ground and go all the way up through the layers of the coop and fort so it would be one coherent and sturdy structure.  He also sent me pictures of his fort (for the grandkids) and let me copy his stairs and gave me the idea to have a pulley attached to a bucket for the kids to play with.  He is my "go to" person even though he lives thousands of miles away. Somehow he always knows what I am talking about over the phone even though I don't know any proper construction lingo. Thanks Dad.

OK, I know I'm pushing it, it's not like I just wrote a novel, if you are still reading I'm almost finished and there are more pictures at the end.

I would like to thank my mom because when she was alive she did random things like build a wood floor out of the pieces of a gym floor she found in the shed.  She changed the brakes on an old Volkswagen bug before you could Google how to do that.  Pretty much, she did whatever the hell she wanted and I love that I am her girl!

I'm grateful to my carpenter neighbor  for shaking my structure and telling me (and my husband) that it is sturdy, for telling me I do better work than his apprentices and in general for boosting my confidence (or ego - fine line).  Thanks for the pointers and tips like how many feet down the supports should go.

Thank you my dear friends and sisters for continual feedback and encouragement!

I'm sure there are more but I think I've milked this as much as I can.  This was like my five minutes and for that I thank you readers!  I hope you enjoy the pictures and perhaps gain some inspiration for your own cool ideas that might be cooking in your head!  Just mention them out loud to your kids and it might actually happen! 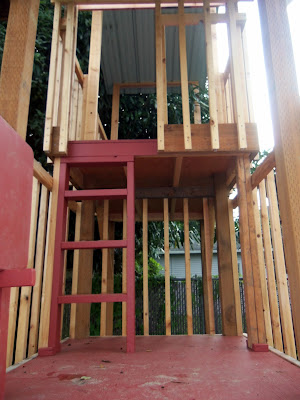 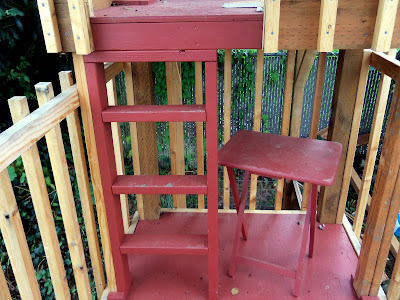 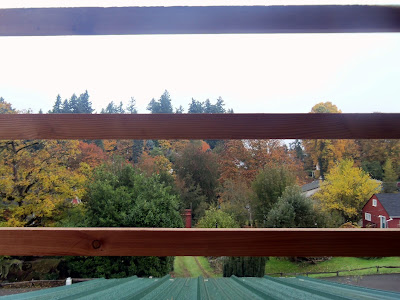 View with the slats in the picture.  I put these boards up just as a guarantee that no crazy kid would ever try to get on the lower roof from the upper level!  Can't be too careful when it comes to kids - you never know what they might do! 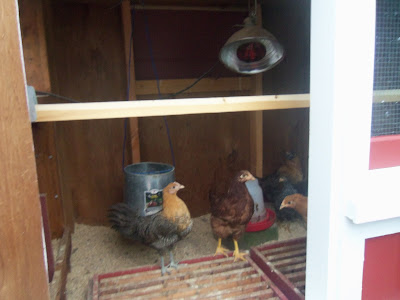 The ladies- they are teens right now not fully grown. You can see a little bit of the entrance to the nesting box on the left, the droppings pits are under the roost.  The water in the picture is no longer there; their water is under the coop now.  That was just for when they first arrived in the coop and I kept them locked in it for the first few day.  Their food is suspended from the roof and hangs a couple inches from the floor. 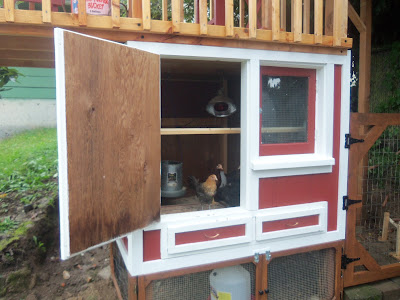